The indoctrination of Gen Z starts in school.

Boundaries have slowly been taken away from Gen Z through the social contagion of “gender ideology”. First, children are taught that anyone can “feel” like a boy or a girl, so anyone in the shared spaces such as changing rooms or bathrooms could be a boy or a girl regardless of what the child sees on the outside. This trains children to not listen to their instincts of what is real, right or wrong, and eventually leads to children suppressing their own instincts. If they feel something is “dangerous” or “off”, or just “creepy,” they have been taught to not question it. They are trained to ignore reality, told to not trust their gut, and are made to believe that anything can be changed with pills and surgeries without questioning the long-term physical and psychological implications of these ideas.

For generations it was common knowledge that any adult telling a child “don't tell your parents, this will be our little secret” was a classic example of grooming. Now, teachers are championing this practice. Children are encouraged to “come out” to their teachers in schools because the teachers will not tell the parents if they aren’t ready to come out at home yet. A child should never be told to keep something from other adults, and especially not their parents.

Children are purposefully taught to mix up sex and gender. They are taught that gender is a spectrum. But since they now they conflate sex and gender, they now believe sex is a spectrum, too. Sex is immutable. There are only two sexes, and what passes for “gender” are actually personality traits. Girls who are tomboys and like to climb trees and enjoys rough activities are now told they were “born in the wrong body” and need to medically and surgically change their outside to match their insides. This bizarre idea not only implies a soul, but also suggests that god makes mistakes.

As gender is a feeling inside someone's head, and the terms "gender" and "sex" are now interchangeable, a child can no longer trust their own eyes that naturally observe secondary sex characteristics. Our brains can quickly tell whether a person we see is a male or female, but gender ideology makes the observation of reality obsolete. This trains children to disregard their own instincts on many other matters, like what is appropriate and what is not. Young girls are taught not to be “bigots” so they’ll let their guard down, forcing themselves to ignore danger signals. This can be life threatening as males are predominantly the perpetrators of violence against females, and other males.

Kids should not be taught to placate someone that their instincts say is creepy as that person may very well be dangerous. It is not appropriate, especially not in a school setting, such as dorms or bathrooms. We have different dressing rooms (and sex-segregated dorms and prisons) for good reason: men and women are different. Biologically, physically, socially. And you can't change that.

When this topic is brought up there is often a one-sided justification regarding the person's feelings. We are told they would feel better being in the women's dressing room, or playing on their sports team. The way girls feel about having a male in their dressing room is either ignored completely or worse, the girls are made to feel like bigots for not going along with this premise.

These indoctrination tactics are very familiar to what happens in cults. As State News explains “Once a target has been identified, cult members deploy a variety of tactics to establish power over the individual. These mental manipulation tactics include techniques like love-bombing, inciting paranoia about the outside world, and public humiliation. While anyone could fall victim to this, young adults and women are the most vulnerable.”

The love bombing tactics can be clearly seen in the LGBTQ+ community. Phrases like “You’re perfect the way you are,” “You are born this way,” and “You have family with us, we love you and will always accept you” mirror the tactic of cults brainwashing their victims.

Cults also use separation from family as a tactic to keep their flock manipulated. It is again why teachers encourage kids to come out to them, but not to their parents. "And if the parents don't understand, it's okay, because we do. You don't need them."

Telling people they could be murdered for being gay or trans, incites paranoia about the outside world. And if you don't agree with them they will try to cancel you and publicly humiliate you. Similarly if you leave a cult, you’ll be harassed by cult members, as seen in several Scientology exposés.

Recently in Dallas there was a “drag your kids to pride” event. Many of the people at the event were interviewed about whether or not this was inappropriate. One question was “what do you think about the parents who won't let their kids go to these events?” The answer was “just know we support you and you have a family here, you can find family in others. if you’re a youth who can't come. We still love you”.

As State news reported: “According to Fontanesi, a lot of the recruitment process is about convincing a target that they are loved and that any questions they are seeking answers to can be addressed by belonging to something that is bigger than themselves. “

Gen Z’s boundaries have been taken away using the social contagion of “gender ideology." Gender ideology has taught kids and teens not to listen to their instincts, it's about how the person feels inside, not what you see outside. Reality is subjective.

The gender ideologists have manipulated people the same way cults do; love bombing; instilling paranoia; and public humiliation. They’ll tell you “you’re loved here.” “You have a family here.” “These people want to hurt you.” and if you dare disagree with anything, or if you leave the cult “you’re a bigot.”

In schools the teachers keep secrets with kids for their “safety”. A very inappropriate relationship is formed when these things are made out to be normal. It's a classic grooming tactic. They let little kids into adult settings, the younger the better, allowing small children at pride and at drag shows where people can be viewed in full kink gear, thereby involving the children in their sexual fetishes.

Drag your kids to pride: 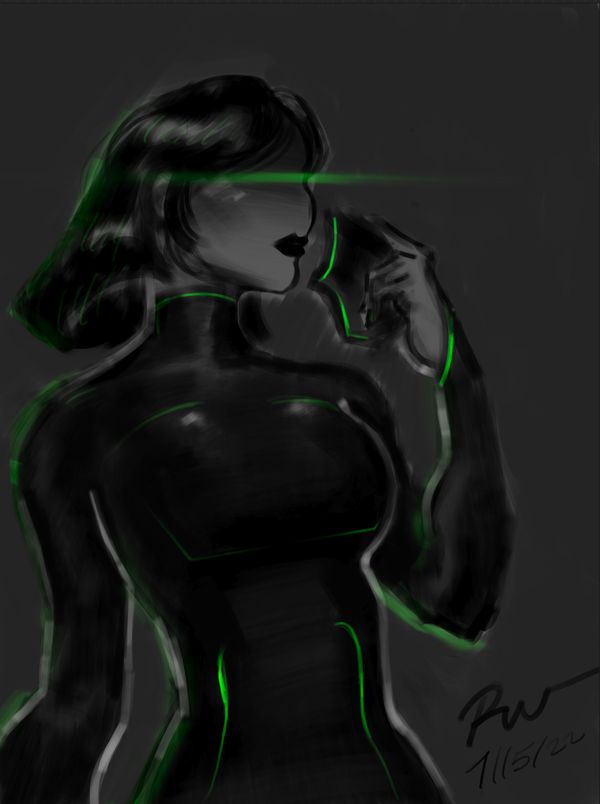 Last night my friend asked me to draw him a photo of the Valorant character Viper, here is my rendition of her. She's an America scientist who works with poisons, hence the name viper.